It's official. The Princess is a high school graduate.

Believe it or not, and most of you will not, I didn't cry. 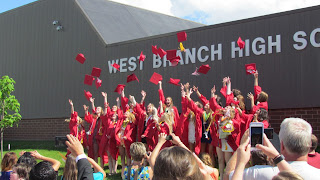 That is not to say that at various times during her party, baccalaureate, and the graduation ceremony my eyes did not fill with tears, I didn't bite my lips, my throat didn't constrict, I didn't have to gulp for air, or that I didn't clench and unclench my fists and wipe my sweaty palms on my thighs.

I am sure my eyes were red by the end of commencement. But no tears slid down my cheeks.

I did not need a tissue. Which is good, because I forgot them in the car.

Someone – several someones – asked me how I felt after her graduation party. I told them the truth:

It was all a blur.

The Princess with all her level-headed wisdom – Where did she get that? When did she get that? – decided she wanted a small, low-key event at home. Somehow we managed to keep the fuss and stress to a minimum, which is to say no one was killed, seriously injured or driven insane. Not that I didn't give it my best shot.

Still, it was a blur of planning, shopping, sorting, cleaning, organizing, and ultimately hiding, storing, covering, and strategic decorating. The guests arrived, we mingled, we laughed, we ate cake and more cake. And more cake. The Princess was beautiful and charming and smiled and smiled and smiled. The Little Prince helped set up and stuck around even after we told him he didn't have to. When did he get so mature?

And then it was over.

Baccalaureate came and went, a lovely ceremony filled with wisdom and humor and encouragement. And cookies. And the blinking, sniffling, chest tightening of not crying.

The graduation ceremony itself, while not what anyone would call brief – especially when crowded into a noisy, hot gymnasium – rushed by. The graduates processed in, there were speeches, words of advice, songs and a slide show that brought me to the edge of tears. Then the graduates received their diplomas, moved their tassels and marched out of the gym for hugs, handshakes, congratulations, and pictures, pictures and more pictures.

And somewhere along the way I realized it had all been a blur. 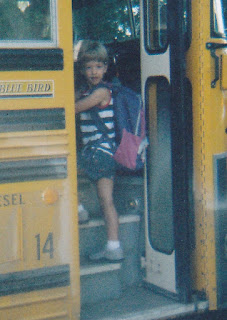 Not just the party, baccalaureate and commencement, but the last 18 years.

Bringing home our Little 5-pound Princess from the hospital. Helping her hold her baby brother. Holding her hand as she started preschool. Walking her up the hill to the bus stop and watching her climb the big stairs onto the bus for her first day of kindergarten. Watching nervously out the window later that week after she announced she could walk to the bus stop by herself. 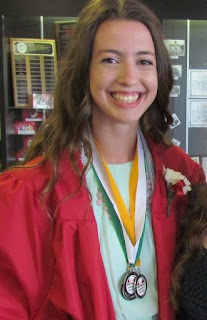 And this fall she will start college, far enough away that I can't visit every day (well, I could, but...) yet close enough that she can come home when she wants to (I hope she wants to).

In between now and then, two and a half long, languid summer months that will seem to drag on forever.

Until they are gone.

I have been organizing The Princess' official pictures – school, dance and sports – in a last-minute attempt to prepare for graduation. Nothing like a hard deadline to make you take a look around and ask “Crap, where has the time gone?”

By extension, I've been sorting The Little Prince's photos as well, because my usual style of photo organization is to slip the envelope full of pictures into whichever tote marked “scrapbook” is nearest the storeroom door. This is after the envelope sits atop the bookshelf for six months, or until the next set of pictures comes home.

Regardless of where they were stashed, or how long (or if) they were displayed, each portrait stirs memories – the haircuts, the clothes, the braces, the glasses. The Princess' reviews of these photos have ranged from laughter to indignation – “Why did you cut my hair that way? Why did you make me wear that?” As if I had any control over anything picture-related after she started school.

The Little Prince has, as usual, taken everything in stride. Each time his sister runs down the hall waving one of his pictures in the air and laughing, he shrugs, grins and rolls his eyes.

He is suffering from Second Child Photo Deficiency Syndrome, combined with a healthy dose of Digital Technology Affliction. Where as The Princess has a ginormous tote full of baby pictures (along with 10 completed scrapbook pages... ok, maybe only five... ish), The Little Prince has only one medium tote. Half-full. And an empty scrapbook.

I console myself with the thought (unverified) that all his childhood pictures are safely stored on a flash drive or SD card. Somewhere. I hope. I have three years before he graduates, so I'm sure I'll come up with something by then. Somehow. I hope. 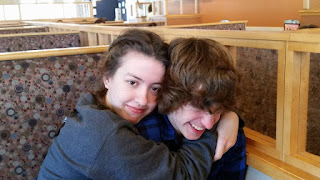 The official school and team pictures capture the essence of different children than the candid shots that eat up space on my phone. I sigh and roll my eyes – where'd I learn that? – every time I try to take a “serious” picture of them. It seems impossible to get them to hold still and stand next to each other (within arms length, as if they possibly know and/or like each other, but without employing a sleeper hold). Getting them to both smile at the same time, with neither of them caught mid-blink, is … impossible-er.

And yet, when I look at those snapshots of my two teenagers happily hanging upside down on the playground, my heart fills to overflowing. I hear them shouting and laughing and urging me to “hurry up and take the picture already,” their faces reddening as the blood rushes to their heads. 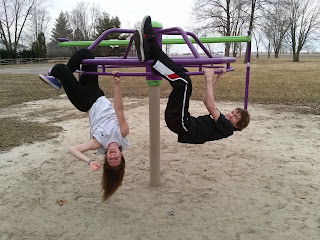 I look at the picture of them trying to squeeze into the kiddie swings and I remember all the playgrounds we've visited. All the slides and swings and teeter-totters and climbing walls. All the ways they used to scare me as they explored their independence. I remember rushing around behind them, arms outstretched, ready to catch them or give them a boost or to applaud (nervously) when they reached the apex and turned around, so excited and proud.

When I organize the official portraits, I hear a different voice. I remember a different type of dread and pride. As I study the familiar-unfamiliar faces captured in these photos I remember sliding each picture from its packaging. I marveled over the changes brought about by another year. So serious. So mature.

Now I look at the portrait of the second grader missing all his front teeth, or the apple-cheeked fifth grader with her new glasses, and I think how young, how long ago. 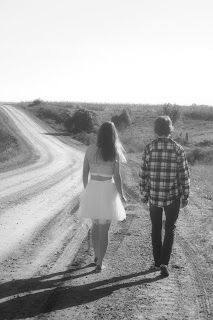 I compare those pictures to the lanky freshman towering over me, to the brown-eyed beauty in the senior pictures.

Again I think, “They are so grown up.”

And yet I hope, I know, I make plans, to take them to as many playgrounds as possible. I will take the pictures that capture the laughter, and the love, and the fears, and the pride.

And I will save them on the computer and print them out and store them in boxes and paste them in scrapbooks, and share them, and keep them close.

Where has the time gone?

Spring has sprung in Eastern Iowa.

Or at least spring has sprung in the minds of clothing retailers in Eastern Iowa.

Mother Nature seems to have a different opinion. Then again, that is the nature of spring in Eastern Iowa – warm one day, cold the next; sunny one day, rainy the next three; rainy one day, snowy the next, melted the day after that.

That's Iowa. That's Spring. We're just as likely to shiver through graveside observances on Memorial Day as we are to sweat through them.

I only whine about this because The Princess and I did some uncharacteristically successful shopping recently. I was looking forward to wearing a new, short sleeve outfit, even if it was only around the house.

Instead I'm wearing a sweatshirt and fuzzy socks.

Spring clothing displays at the mall are every bit as enticing as those gardening catalogs you receive in January. They're both so full of promise, potential and color. They brim with the anticipation of warmer, sunnier, longer, busier, more vibrant days. They tempt us to throw off our winter doldrums. They encourage us to drag ourselves out of our suffocating winter rut. To plan a blue-sky escape.

Retailers feed our growing resentment of bulky layers and head to toe coverage, displaying outfits that seem to shrink from both ends, simultaneously exposing shoulders and legs. Tank tops, spaghetti straps, cold shoulder and off the shoulder blouses are paired with cropped pants, capri pants and ever shorter and shorter shorts. Dresses are frothy and loose, form fitting and curve hugging.

Boutiques burgeon with everything pastel and white and sweet and floral and delicate. They sprout aggressive patches of  navy blue, black and rust, bursting with big, loud, geometric patterns. Because, hey, this is fashion and we'll wear whatever the designers tell us to wear.

Spring is a season of optimism. That's what drives us out to our yards to rake and clean and plant. That's what sends us to the mall in search of a fresh, clean, new look.

Optimism whispers that yes, we can squeeze into a trendy pair of leggings and the gauzy swing blouse that looks so adorable on that size 0, headless mannequin.


Spring shakes its head, hands us a pair of baggy sweatpants, and tells us to lay off the ice cream for a couple of weeks while we wait for the unseasonably warm weather to become seasonable again.

Posted by J Salemink at 7:02 AM No comments: