This is not a review of the Billy Joel concert at Wrigley Field July 18. Because really, what else would I write besides that the show was amazing and Billy Joel was awesome and adorable. And I could have told you that before the lights even came up.

Let's face it, Billy Joel could have gone on stage and presented a two-hour dissertation on the state of modern paint drying and I would have squealed like a teen-aged girl goosed by the captain of the football team. Luckily for the sold-out crowd, Billy Joel instead chose to do what he does best, delivering a fantastic performance and generally delighting the audience. His two-hour, hit-filled show featured 23 of his songs in addition to “Take Me Out to the Ballgame” and “My Kind of Town (Chicago Is).” The set list included many of my favorites because they're all my favorites, but was light on the more obscure pieces that I like. If he played 'em all, we'd still be there. Which would be OK by me.

But this isn't a concert review, it's a Chicago experience review. Or more accurately a big shout out to some of the friendly, helpful people I met during My Big Adventure Travelling to Chicago All By Myself. You often hear visitors say that Midwesterners are friendly, and by golly, we are!

Thank you to the Chicago art museum docent who practically took me by the hand and led me to the drinking fountain when I asked for directions. I must have looked particularly confused and dehydrated.

Thank you to the people who didn't honk at me when I ran the red light leaving the Millennium Park garage. In that dark intersection beneath the overpass, I was not the only person who clearly had no idea where they were supposed to be. In all fairness, I didn't honk at anyone, either.

Thank you to the lady who showed me how to use the Ventra card kiosk to get my ticket for the “L” to Wrigley. A bazillion out-of-towners trying to get on the Red Line at Grand at 5 p.m. and less than 10% knew how to work the ticket machines. We all apologize for the delay, regular commuters.

Speaking of out-of-towners, it was so nice to meet you, couple from Ontario, Canada! They traveled all the way to Chicago for a three-day weekend planned around the Billy Joel concert. And a ride on the “L.”

Thank you, young girl who thanked me over and over again when I let you have the open seat on the train (I didn't tell you I have to face forward or I get motion sickness). She'd had a long day at work and looked exhausted. In addition to being friendly and kind, she's a concert musician and opera singer. And obviously a Midwesterner.

Thank you to the crazy fan outside the stadium who was over-the-moon about meeting the members of Gavin McGraw's band. You made me feel not-so-crazy. And thanks to the security guy who let her talk to them and let me listen to her gush as we stood outside the performers' bus area.

In fact, thank you to 99% of the staff at Wrigley Field for being unbelievably polite, kind and friendly (and eventually that one girl warmed up to me, too). It didn't matter who they worked for – blue-shirt Wrigley staff, orange-shirt Wrigley security, white-shirt extra security, green-shirt something-else officials, white-shirt ushers – they were all great!

Thanks to the cute orange-shirt guys who directed me to the field entrance, the helpful orange-shirts at the field entrance, and all the shirts who pretty much let me wander wherever I wanted on the field and around the stadium. And offered to take my picture! Of course it was two-hours before the concert and they may have been as bored as I was. I am never early for anything because I don't have the patience to wait. But think of all the nice people I got to meet this time!

Like the usher guy who offered to take my picture with the infield grass, the stands, the stage, the tarp-covered pitching mound.... Oh yeah, I think he was bored.

Thanks to the end of the third-base line beer-stand guys who tried to card me for buying a bottle of water (their first sale of the night), and then offered to take my picture with the 355 ft. outfield wall marker. I took their picture, too.

Thanks to the beer guy inside the stadium who suggested a beer might help calm my upset stomach. I didn't take him up on that, but we had a nice chat.

Big, big thanks to “not Billy Joel” for letting me take a selfie with him. We swapped cameras and took pictures for each other “batting” near home plate. I started to leave, but just couldn't resist. “You know, you kind of look like Billy Joel,” I said. He shyly said he had been getting that a lot that night. He had the right hair style, the right goatee, the right height, and the prettiest eyes! I had to get a picture. 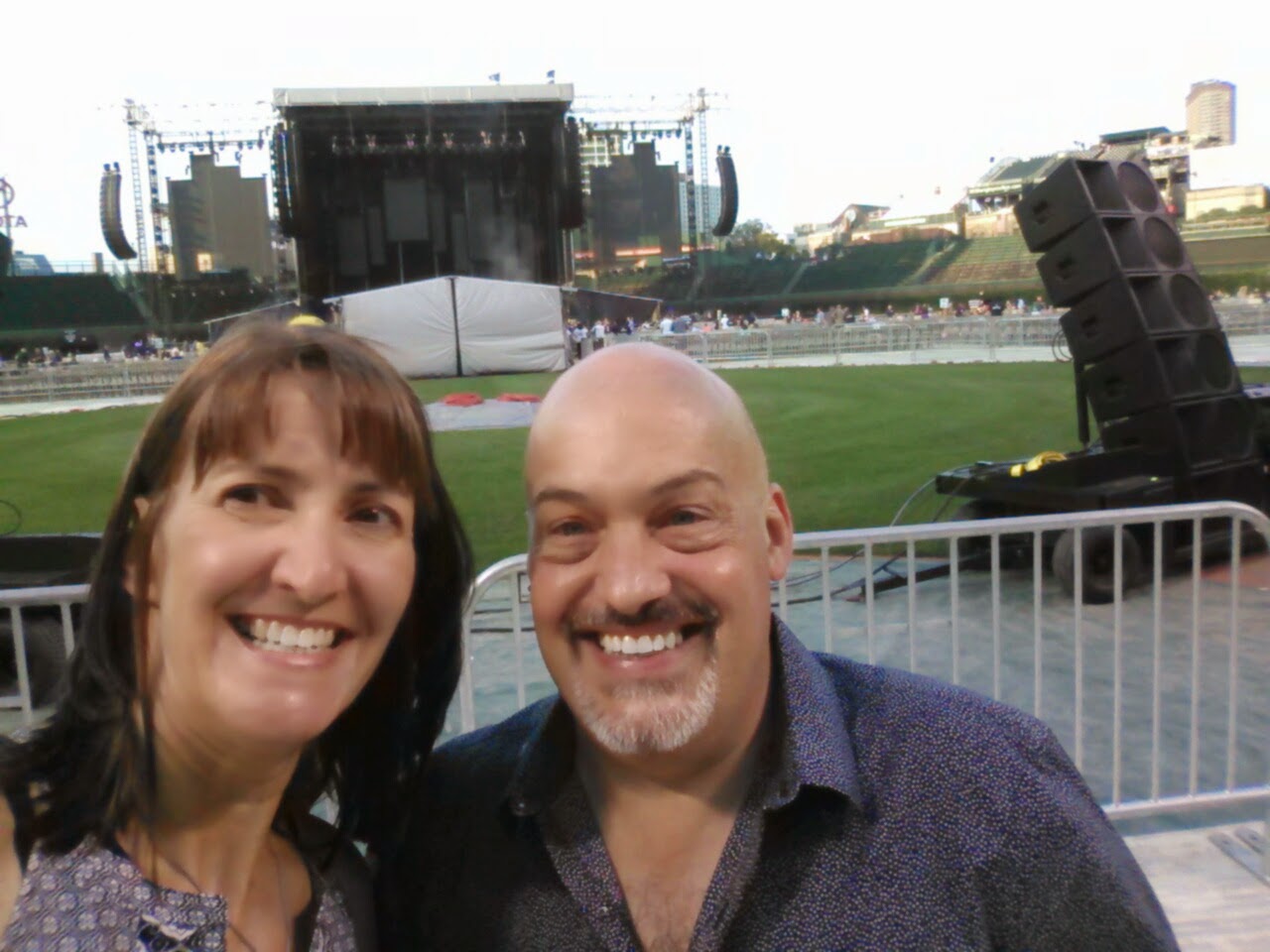 Thanks to the security guy who may or may not have (I wouldn't want to get him in trouble) pointed out the real Billy Joel standing on the balcony above us. Of course I (and everyone else) had to take a picture, although I felt guilty intruding on his privacy.

Thanks to the usher who told me to go for it when I said I was thinking of asking the caterers to give my blogger info card to Billy Joel. “What have you got to lose?” he asked. They couldn't do it, but it was worth a shot.

Thanks, of course, to my seat-mates: Mitch the policeman and his daughter the uber fan, and the nice guy from England-now-Phoenix. You made me feel like part of a group. And to the four wild girls behind us – three Sox fans who found themselves sitting in the Wrigley outfield with their lone Cubbie friend; even the three drunk, college-age guys in front of us who knew just about every song and were very entertaining: Thanks, everyone!

And thanks to the nice lady on the “L” who asked her friend to give me directions when I followed the crowd and got off the train one stop too soon. It wasn't your fault he sent me east instead of south. And thank you to the train station attendant who talked me down when the ticket kiosk wouldn't take my quarters and I was about to lose it! I can't believe I paid three dollars to ride three blocks. But it was dark. And I was tired and lost-ish. Not a good combination for me.

I'm sure there were other nice people I'm forgetting, so a huge thank you to pretty much everyone I ran into.

You've restored my faith in humanity.

I've always tried to “pay it forward,” but now I'm going to have to work extra hard not just to do that, but to “pay it up,” as well.