I have a friend who doesn't believe in emergencies.

Do I really need to say that he's male, young, single and childless? In other words, he's free from the causes of most emergencies.

He also plans out his days with military precision and is able to stick to that schedule.

I plan out my days with the precision of a hyperactive rabbit on crack and I stick to that schedule for at least 30 seconds. Most of my days are a series of emergencies relieved by the occasional catastrophe. If I can get to lunch with just one major schedule change, I consider myself lucky.

In the interest of full disclosure, I should add that my friend has built his own successful small business, so the potential for emergencies is certainly there. Not to mention that he has to deal with me, so emergency-by-association is a statistical sure-thing.

In the interest of full, full disclosure, what he actually said was that he doesn't believe that every emergency has to be accompanied by a high level of drama.

At first I chalked it all up to his maleness, youthfulness, singleness, child-free-ness, and general Zen-like nature. Then I realized most of my emergencies aren't emergencies at all.

Still, that doesn't explain the racing heart. The panicking. The worrying. The levitating.

Much to my chagrin, I realized I am a a drama resonator.

When you call me in a tizzy over your latest emergency and need my help I will abandon my plans in order to help you out. I can't help it. It's what I do. It's how I'm programed. It's a physical and psychological need. I don't mind. Really. I want to help. I have to help. Please let me help!

The helping isn't the problem. The tizz is.

When I offer to help, I also absorb a little of your anxiety. I tuck it away deep inside me where it starts to vibrate. Then my hyperactive planning rabbit taps his his lucky foot and shifts the schedule. Now I really have a thumping baseline.

As I fall further behind in my plans – meetings are scheduled, rescheduled and run late, a call goes out for volunteers, errands need to be run, appointments made and kept, deadlines shift and come due – my growing collection of anxieties join forces. They plug in the amplifier, turn it up to 11, and throw away the knob. After a while I feel like they will burst from my chest like that little critter from Alien, or my entire body will vibrate with such intensity I start to levitate.

I usually lean toward levitation.

The Queen Mother knew this about me (I had to learn it somewhere). Once, years ago, someone commented to her about how I remained calm when all about me was chaos. She just smiled and told them I was like a duck – unruffled above the waterline, but paddling like heck under water. 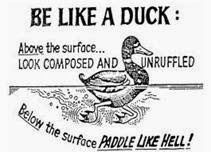 The problem with being a duck is that most people – myself included – don't realize when I'm one wrong-flavored tic-tac moment away from an epic meltdown. So if I go all head-spinning, pea-soup spitting, full-out wack-o on you, don't worry.

It's not you, personally. You were just in the wrong place at the wrong time. The storm will pass quickly.

On the other hand, if I seem really, really calm....