Fun and Photos in the Chili Chilly Extreme 5K

Last November when I ran the Chili Chilly Extreme 5K (Nov. 30, 2014, post) I got so caught up in trying to cover it for the local newspaper that I forgot my number one rule for running:

I mean, I did have fun.... But I was so worried about everyone else finishing and leaving before I could take pictures or get quotes that I didn't really have fun.

So, when they moved the Chili Chilly to March, I had to try again. But this time I wanted to focus on having fun instead of focusing on photos.

Which is a really good thing, because now I'm thinkin' pictures during a race – especially an “extreme” one – might be a really bad idea. Or a really, really good source of blackmail material.

The Chili Chilly starts on semi-solid ground before going off-road through a field. The established trail quickly turned into a slippery, slidey, bog of sucky, sticky mud, so I decided to blaze a new, more solid route by doing a “high, wide knees” run to straddle the corn stubble next to the trail.

Then, just for kicks and giggles, let's say there were cockleburs mixed in with the stubble. The stubble that I was straddling.

There I was, trying to run and pick cockleburs off my crotch when I looked up and realized I was quickly approaching a volunteer who was directing us out of the field and into the woods.

I was really, really glad he did not have a camera.

Half a mile later I looked down and saw a gigantic spider climbing up my thigh. My forward progress was eclipsed by my skyward progress as I flailed about trying to dislodge the... mass of cockleburs.

“Not. A. Spider.” I explained to the policeman who was directing traffic on this portion of the course.

Really, really glad he did not have a camera.

A few hundred yards later the trail ran smack-dab into a huge, fallen tree tagged with a sign indicating we could go over or under.

Faced with the option of hard or harder, I, of course, chose harder. Placing my hands on top of the log (about chest high), I gave a mighty jump, hoisted myself up, and flung one leg over. Relieved to have more or less made it to the top, I lay there straddling the trunk.

Then I realized I still had to get back down... before Jerry could quit laughing and grab a camera.

I managed the dismount with all the grace of a drunken water buffalo and scrambled off up the trail. A couple of twists and turns and 30 yards later the trail circled back to a small rise beside the Sequia obstacle. I was just about to call out to Jerry and tell him how glad I was that he didn't have a camera when SCHWA-LIP my feet shot out from under me and I slid down the trail on my cockelbur.

The final, big obstacle involved sliding down a creek bank to wade across the Mississippi River... or maybe it was just a creek. A really, really cold creek that was ankle deep on one side and chest deep on the opposite side.

The drunken water buffalo was finally in her element.

I am really, really glad there were no cameras to prove otherwise.

After the race I was trying to clean off the worst of the muck when a chipper girl from the youngest age group asked if I had gone through the creek.

“Of course!” I answered. “That was the best part!”

“I know!” she said, excitedly. “Some people skipped it, but me and my friends sprinted to get there!”

An ear-to-ear smile lit up her mud-covered face and she laughed really, really hard.

She really, really had fun.

And I really, really wished I had a camera. 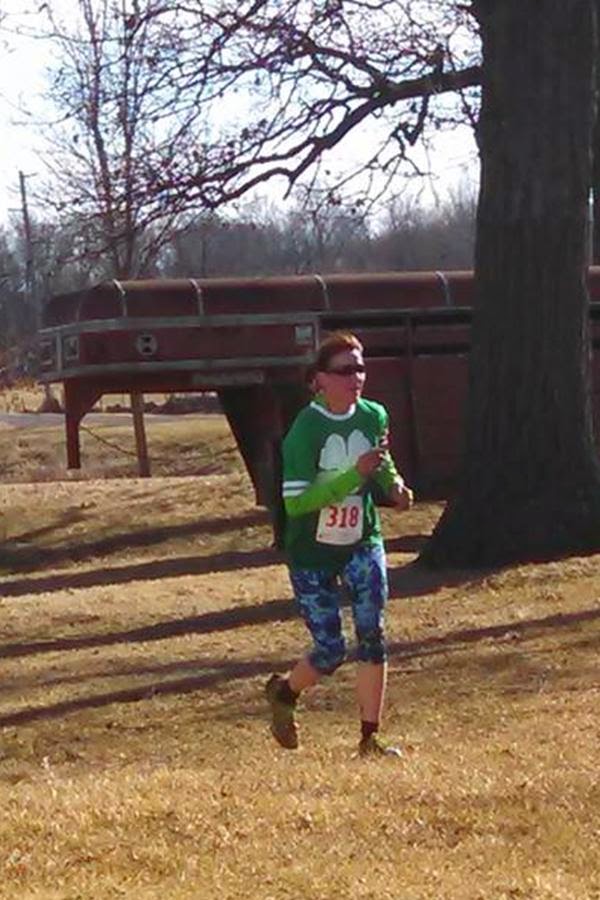