Early summer descended on Eastern Iowa packing all the heat and humidity usually reserved for much later in the season. In this weather, the corn shoots skyward, and the weak are culled from the herd until only the hardiest Iowa natives are left to complain about the weather.

The Princess and Little Prince had retreated to the cool solitude of their bedrooms, perfectly content to relax and stare at their smart phones in air-conditioned comfort. (“We needs the charger. Must recharge the precious.”) But underneath it all, I could tell they were longing for some quality, enforced family fun time.

It was time for a Mom-tervention.

It was time to pry them out of their man-made, air-conditioned, soft and cushy caves 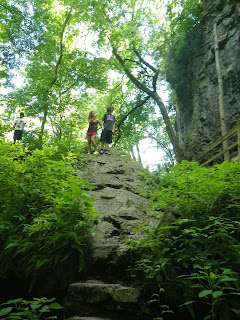 and take them to some nature-made, naturally cooled, drippy and muddy real caves at Maquoketa Caves State Park. The King declined the opportunity, citing work deadlines (and lack of air-conditioning).

I had been to the caves as a kid – we made frequent trips to the area to visit relatives – but The Princess and The Little Prince had not. This trip was a chance for me to share old memories (which they loved – not) and create new memories (which I loved – totally).

Part of the reward for not selling off your children when they were pre-teens, is having them develop into people you actually enjoy spending time with. While The Princess and The Little Prince can, individually, be mutes, when they are thrown together in a car they become Laurel and Hardy. Their schtick began before we even left the house:

The King (from his air conditioned throne): Be sure to wear sunscreen.
Princess: Did Sacagawea wear sunscreen? Did Herbert Hoover?
Prince: And he became president!
Princess: And had a sport named after him! (http://www.hooverassociation.org/newsevents/hooverball/hooverball_history.php)

For more than an hour, I listed to their constant back and forth, covering everything from family trips (“Hey, remember that time you told The Little Prince it was time to go, and we searched the house for him for like, 30 minutes, because he thought you really meant it was time to go and he was waiting in the car? Good times.”) to my driving ability (“Are we lost yet? Are you sure we're not lost yet?”).

For the record, we weren't lost (yet), although I never did find the little wooded, copse my Grampa liked to point out as the spot where my Gramma Anna once hiked her skirts (literally) to answer nature's call. That historic location seemed to move each time we traveled those roads, but Grampa's delight in telling the story – and Gramma's adamant denial – never did. There's a slight chance hyperbole runs in my family.

Eventually we did make it to the park. I didn't remember it being quite so popular, but that day it was overrun with 20-something year-old hikers and rock climbers (“I think they're high on more than nature.”) and families with little children.

At times I watched wistfully as the parents held their child's grubby little hands, or boosted them up onto some of the small rock formations, arms outstretched to assist if needed, but giving them the chance to explore their independence. 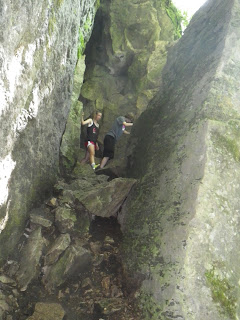 Meanwhile I panted, trying to keep up with my little angels, letting them lead the way over rocky trails and trees, and cringing as they insisted on climbing to the highest points they possibly could. Every so often The Little Prince would scout out a trail, only to
tell his sister it looked “a little sketchy.” They would silently lock eyes for a moment, then The Princess would smile and shout “Parkour!” and off they would scramble over mossy boulders, muddy logs, and loose rocks. This is why we say that when The Princess becomes the voice of reason, you know you're in trouble.

Still, there were times when the littlest hikers out parkoured us. While The Royal Procession picked our way cautiously across the creek (again), tottering on the slippery rocks, one intrepid 8-year-old sloshed right past us through the ankle-deep water. (In our defense, it was muddy, it looked much deeper, and it was cold.)

In between the daredevil feats of climbing, tentative spelunking, and creek fording failures, The Princess and Little Prince turned their comedy routine to a variety of topics:
The beauty of the park – “You know you're from Iowa when you learn to pronounce methamphetamine, but not aesthetic.”
The natural features of the park – “Fat Man's Lament? I thought they said Bat Man's Lament!”
Philosophy – “We have to cross the river again?” Me: “It's a creek.” “It has potential!”

In the end, the joke was on me:
“Why didn't you tell us to wear old shoes?” “Why didn't we bring flashlights?”
Me: “Because I didn't think I'd be able to get you out of the car.” Honest.
(Sharing an incredulous look.) “Why not? This is the best place ever!”