Night of the Living Brocco-tot

Once upon a time, in a quiet home on a quiet lane in a quiet town, something happened. Something so horrible, so terrifying, so unnatural, that even now – nearly four days later – it is referred to by shocked locals as ...

It was a peaceful evening, like countless others in this unassuming home. The tranquility was broken only by the frenzied racing of a wild-eyed grey cat, running his nightly crazy-laps up and down the hallway with all the grace and elegance of a drunken zombie horde.

The mouth-watering aroma of cheesy chicken casserole filled the cozy home, luring the Little Prince and the King of the Castle from the dark depths of the basement, up the creaking staircase and into the kitchen. A solitary figure stood by the oven, waving a hot pad over a steaming cauldron and muttering an ancient incantation:

Double, double, toil and trouble;
Casserole's not browned, but at least it's bubbled.

It was … The Mom-ster! A toxic health-food spill in the freezer section of the local grocery mart had turned this normally mild-mannered housewife into a veggie-pushing mad chef!

“What's ... that?” the Little Prince asked cautiously, peering into the 9x12 baking dish.

“What's on top of the casserole?” The Little Prince asked, suspicious of The Mom-ster's maniacal cackling and creepy hand wringing. “They look like … undercooked sausages.”

The Mom-ster hesitated a moment too long before replying.

“No they're not.” The Little Prince was not fooled by The Mom-ster's overzealous enthusiasm. He crossed his arms in a classic Picky Eater defensive move.

“You're right! They're …” the Mom-ster paused dramatically, waiting for the ominous music to play. Duh-duh-DUHHHH! There was no music, of course, because this was real life, not some horror movie. It was much, much more frightening than any movie could ever be. This was ... dinnertime! And those strange, grey-ish green blobs on top of the casserole? 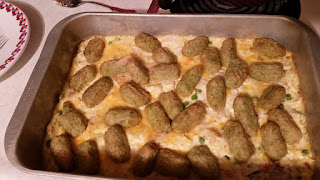 The Little Prince gasped. The King of the Castle looked up from his magazine in shock. Even the cat screeched to a stop and hovered protectively over his food dish.

“Oh just eat them. They're good for you. One bite won't kill you.” Duh-duh-DUHHHH!

Before she could dish up steaming plates of chicken casserole with proportional amounts of the some-what healthy, albeit odd-looking, garnish the Mom-ster was called away to a meeting. She returned to find a decidedly dis-proportionate amount of brocco-tot leftovers.

“Curses! My attempts to foist somewhat healthy eating habits on my family have been foiled again!" the Mom-ster cried out in anguish, but not surprise.

When the brocco-scarred Little Prince related his tale to his sister The Princess, at first she reacted with mild disappointment.

“Sounds like a waste of perfectly good tater-tots. And broccoli.” She did not share his aversion to all things vegetable.

“But... but you don't understand!” The Little Prince protested. “There was no tater in these tots! Just broccoli!”

The Princess fixed The Mom-ster with an ice-cold glare.

They say that when the moon is full, and the wind whistles through the trees, and the weather calls out for the comfort of a home-baked casserole, if you listen carefully you can still hear the siren song of …